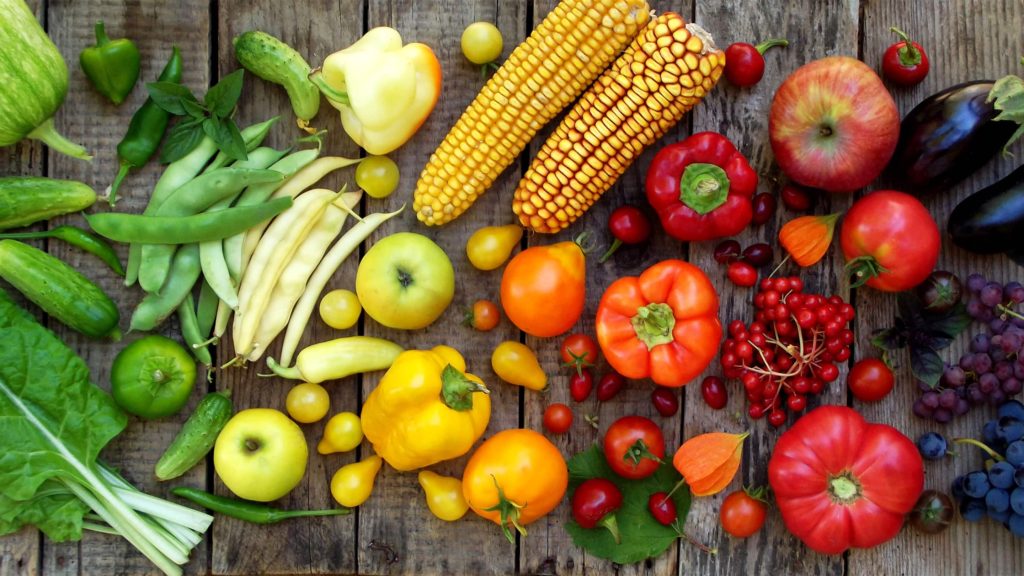 To enjoy a balanced diet, you cannot skip the daily portion of vegetables 蔬菜 shū cài. Vegetables can provide a variety of water-soluble vitamins needed by the human body to maintain the normal functioning of organs and the immune system. At the same time, vegetables can also provide the human body with mineral elements, such as potassium, calcium, and magnesium. These substances are helpful to improve cell metabolism and improve physical fitness. The rich dietary fibre in vegetables can also improve human intestinal function and the proliferation of intestinal probiotics. Vegetables, especially dark vegetables, also have an important health-promoting effect. Taking more vegetables can prevent certain chronic diseases such as cancer, cardiovascular and cerebrovascular diseases, diabetes, osteoporosis, etc.

In Chinese cuisine, lots of vegetables are applied to add more flavour and texture into the dish, also to ensure nutrient balance. Now let’s have a look at some facts about vegetables in China.

What vegetables grow in China?

According to statistics from experts of Chinese agricultural history, there are more than 150 kinds of vegetables in China. Unlike the fruits in China, about 60% of these vegetables are introduced from overseas. Original Chinese vegetables include Chinese cabbages大白菜 bái cài, Arrowhead慈姑/茨菇 cí gū, Scallions 葱 cōng, Chives 韭菜 jiǔ cài, bamboo shoots 竹笋 zhú sǔn, etc.

Till the Qing Dynasty, all kinds of vegetables you can see nowadays on Chinese markets had completed their transition in the land of China.

What is the most popular vegetable in China?

Chinese cuisines are widely applying all kinds of food ingredients including meat flesh, vegetables, herbs and fruits. Some of the vegetables are very popular and generally used in Chinese families. 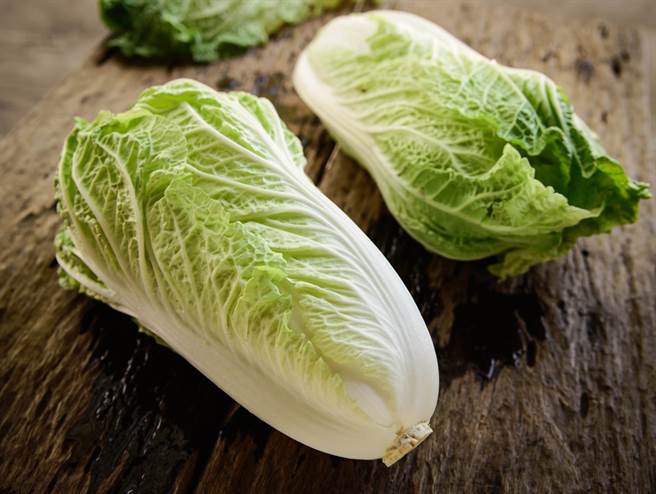 Chinese cabbage was called “菘sōng ” in ancient times. It was originally produced in northern China. Its seeds were found in clay pots unearthed from the Banpo cultural site, indicating that Chinese cabbage has a history of more than 6,000 years.

Cabbage can be stir-fried, can be boiled in soup, and is also suitable for pairing with other types of meat. 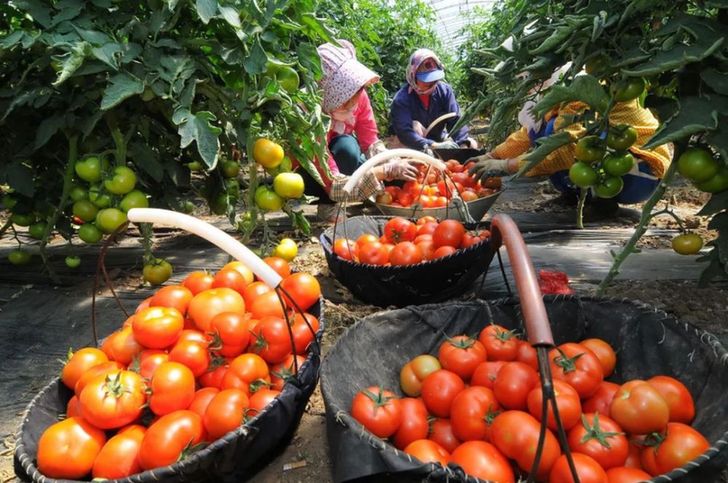 You must have heard about the famous national dish of China – the stir-fried tomatoes and eggs. Though tomatoes are not originally from China, Chinese people use this juicy vegetable delicately to balance the sour-sweet taste of the dish and also let the bright colour of the tomatoes as an attractive decoration.

Except for the famous stir-fried tomatoes and eggs, tomatoes are also widely used when cooking meats dish. The fresh sour taste can make the meat tastes less greasy. Some popular meat dishes that using tomatoes are Stewed Beef Belly Meats with Tomatoes, Stewed Pork Spareribs, Sweet-sour pork ribs (it is also a dish cooked with fruits, find out more facts by learning about the fruits in China)Stir-fried tomatoes and soft tofu, Stir-fried minced tomatoes, pork meat and green peppers, etc. 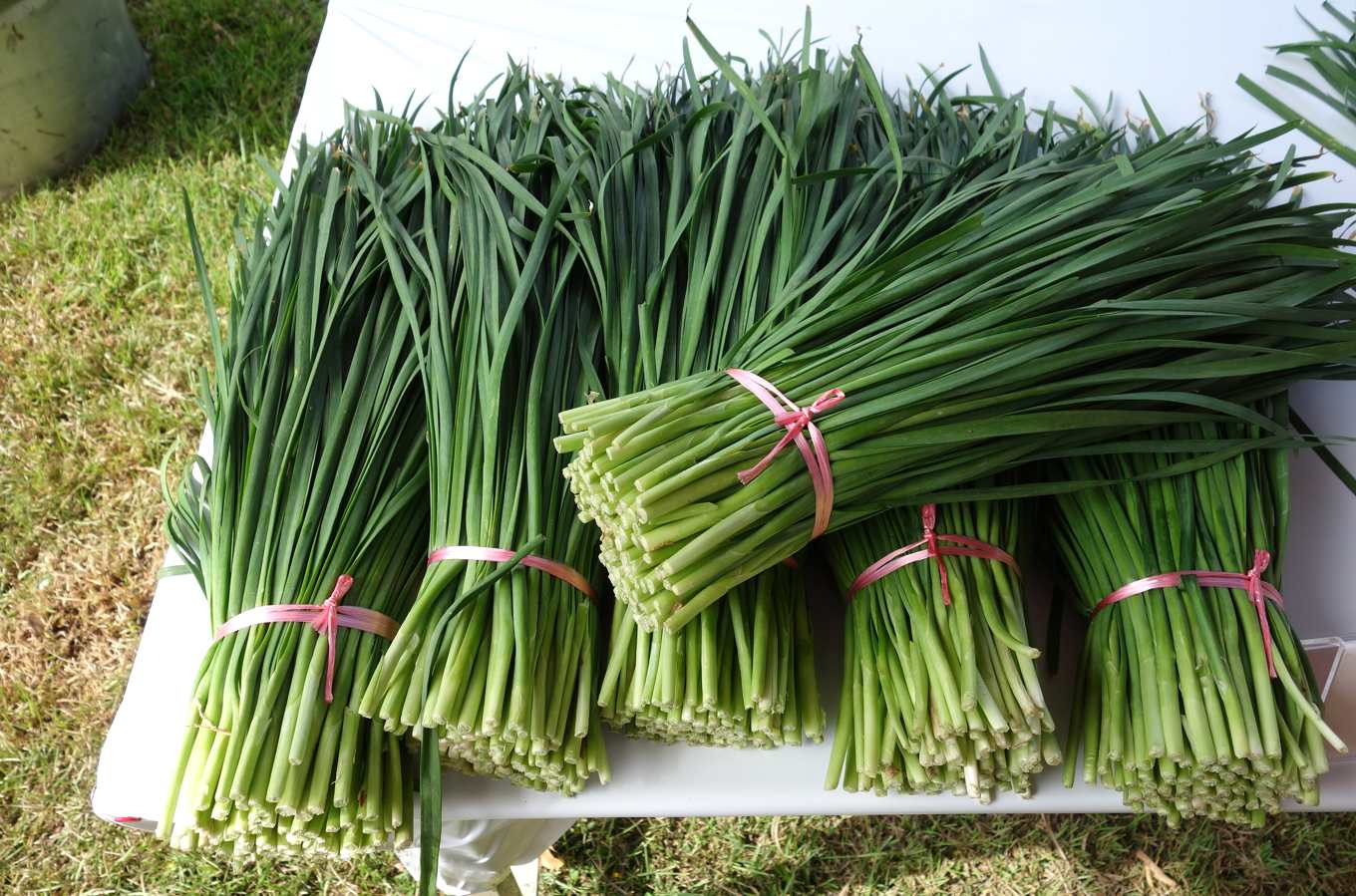 Chives is a kind of vegetables that can highly adapt to the environment. It is resistant to extreme cold and heat and is widely planted across the country of China. In China, chives are mainly divided into two categories, broadleaf and narrow leaf. In Chinese cuisines, chives can be used as a condiment for dishes or as the main ingredient for cooking. Chives contain special ingredients such as plant-based aromatic volatile oil and sulfides, which emit a unique spicy odour. These substances can help increase appetite and facilitate the human body to absorb vitamin B1 and vitamin A. 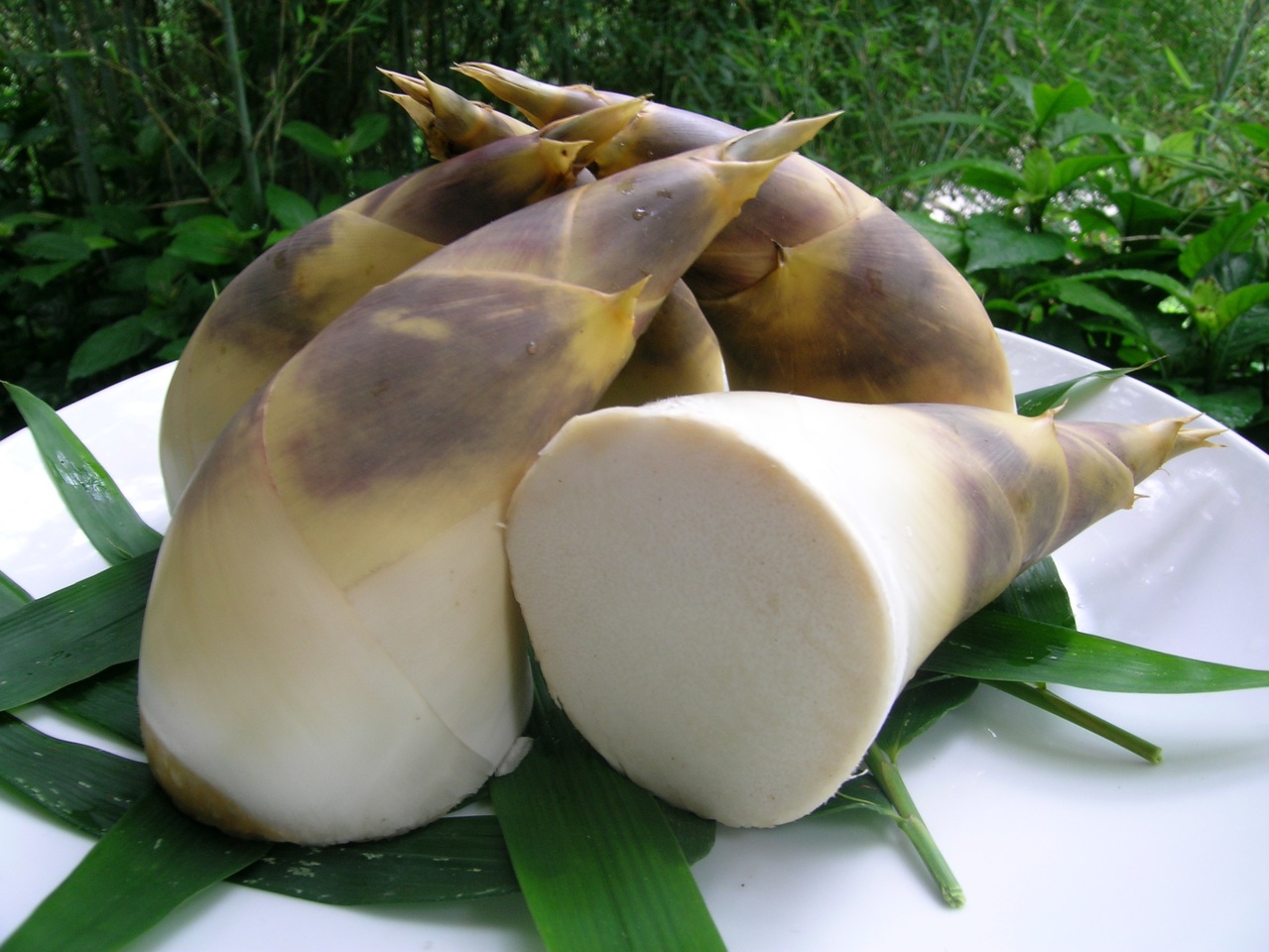 Bamboo shoots are a traditional Chinese delicacy with a fragrant smell, crispy taste, and a long history of cultivation. Since ancient times ago, bamboo shoots are praised as a pearl among food ingredients.

Bamboo shoots collected in the winter and spring seasons have the best taste. It can be freshly cooked or can be pickled to stimulate out a richer taste and preserve for longer.

The best way to appreciate the fresh taste of bamboo shoots is to cook them with meat. No matter it is cut into cubes, slices or strings, its essential flavour is always well blending with the meat and make the dish less greasy. The most famous lotus roots growing area in China is the Hubei Province, where has Wuhan as its capital city.

As its name indicated, the lotus roots are the root part of the lotus. There are pipe-like holes inside of the lotus roots. When it is transversely cut, you can observe silk-like fibres connecting the separating segments.

Lotus roots are sweet and crispy when it is still raw, but it could taste soft and collapse after well-cooked. So it can be cooked as both a cold dish and a hot dish.

Where to buy vegetables in China?

The most common place to buy vegetables and fruits in China is the agricultural products trading market. This market is particularly set up for selling and buying various agricultural products, including vegetables, fruits, cooked dish and other side-line products. Some vegetables sold here are from big farms nearby the city, and others are directly sold by self-employed farmers. Vegetables sold on this market are fresh and clean. You can negotiate with the vendor about the price. Normally, in the evening, a special discounted price would be offered to sell out the stock as soon as possible.

Besides the market, you can also go to the supermarket for vegetable purchasing. If you have downloaded some useful mobile apps when living in China, such as Meituan, E’lema, then ordering vegetables online is also an available choice for you. There is even a group-buying service if you book your vegetables online, which allow you to buy vegetables at an unbelievable cheap price.

Are vegetables expensive in China? 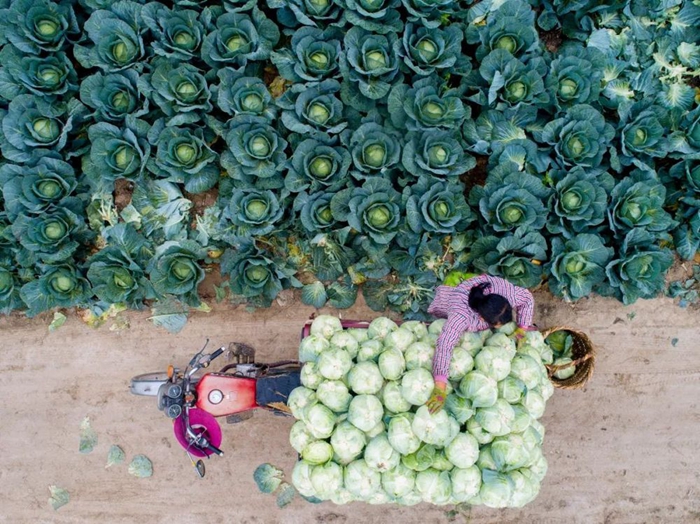 The price of vegetables in China is usually at a reasonable level. China has a huge population base and vast territory, and it seems impossible to ensure the vegetable supply match up with the purchasing need. To make sure that everyone can enjoy vegetables throughout the whole year, the government invested both a great amount of fund and technology in the agricultural industry and the farming land area is also growing gradually every year. So the yields of vegetables are in a quite large quantity that enough to match up with both domestic demands and export demands. That’s why the price of vegetables in China is usually cheap and steady. You may learn more about the Chinese agricultural industry via the FAQ section below.

More free videos for Chinese learning and practice can be found on Keats School’s website. You can also follow Keats School on other social platforms to enjoy daily Chinese Character learning and interesting tips of Mandarin study.

Embracing both of these two concepts gladly, Mandarin and the Chinese language, but focus on Mandarin… 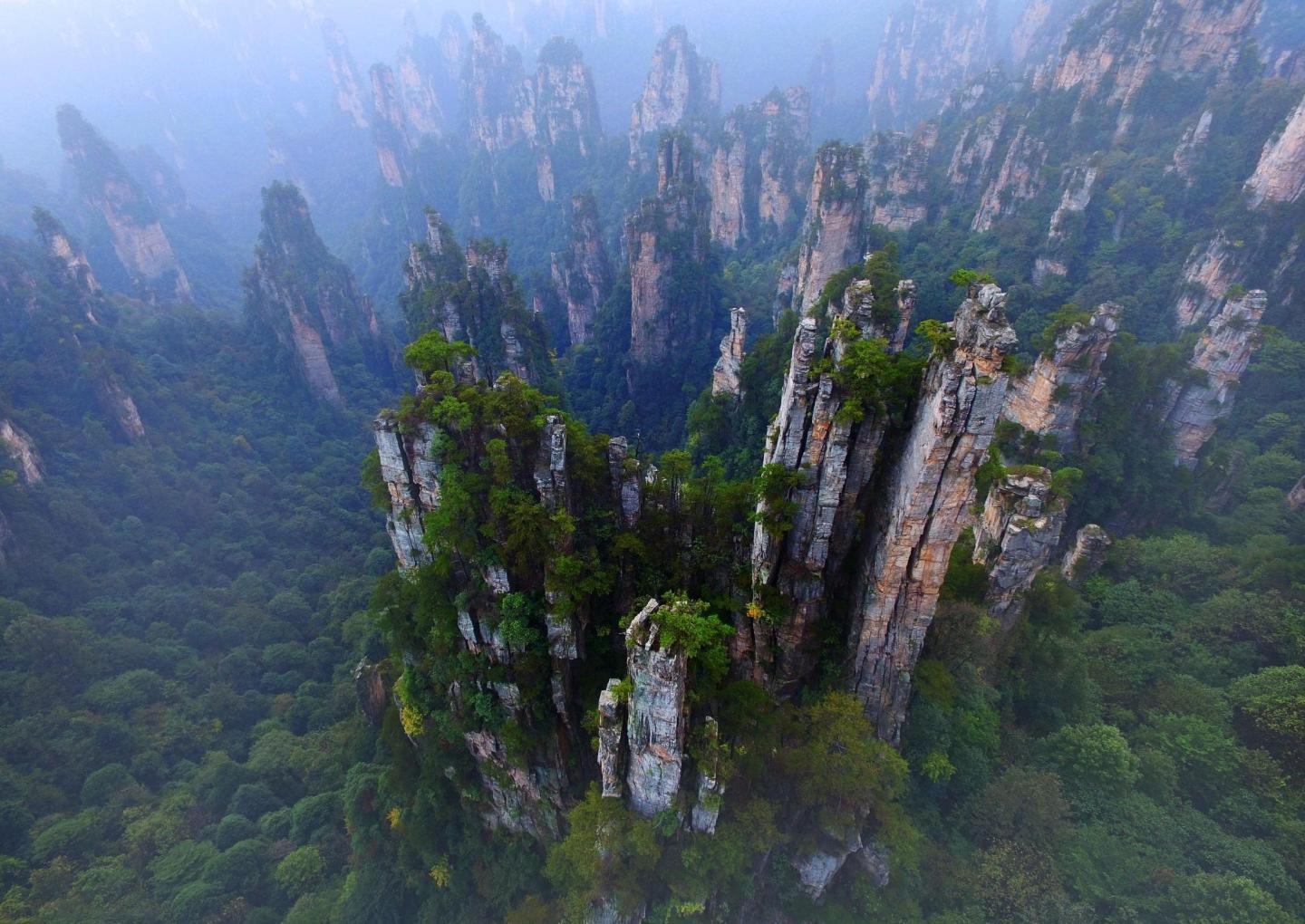 When considering where to have immersive Chinese language learning in China, I would not recommend Zhangjiajie… 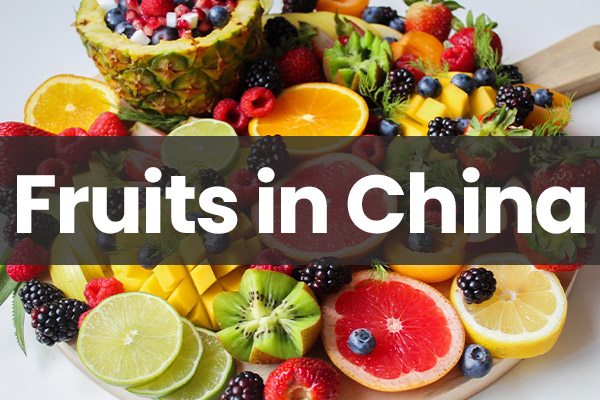 Fruits in China [Audios and PDF]

Among those hundreds of varieties, what kind of fruits you can have when living and learning…

Kunming’s scenery is very beautiful. My favorite learning method at Keats School is one-on-one because it is suitable for everyone. My teacher is very good, very caring, and lovely. My life in Kunming is very good and the weather is very good. The air is very good. It is good for the elderly’s body.

I have studied at Keats for 2 semesters. I highly recommend Keats School. If you are very interested in Chinese culture, I would suggest you come to Kunming. Kunming people are very friendly. The weather in Kunming is great. So I recommend that you study at Keats in Kunming.

I decided to go to Kunming because I like smaller cities and I like the climate here. We had four hours a day study here and my dear teacher taught me very much and never lost her patience with me. It was a really wonderful experience to be here and I recommend Keats school and the teachers here to everyone who likes to learn Chinese. 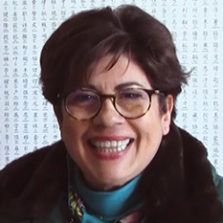 It is very comfortable studying at Keats. The teachers are very friendly. I welcome you to come to study Chinese at Keats.

It has been notable because I have met a lot of people who I met first time last year like me to come back to Keats this year. The teaching has been fantastic. The teachers carefully prepare each lesson. I think this one-on-one approach is really a great way perhaps any way to rapidly increase your level of Chinese and increase your confidence and fluency with the language.

My teachers are all excellent. They trained the teachers so professionally. I feel like I learn very quickly with my teacher. They are very serious about their students and I know every teacher is like this. I would highly recommend that you come to Keats.