The Mandarin Language: A Brief History

The Mandarin language is the most widely spoken form of Chinese. Not only is it spoken in all of China, but it’s also spoken across the whole globe.

We wanted to give you a brief history of the language. Once you finish reading this, not only will you want to learn the language, but you’ll know the great history behind it too.

Where does Mandarin come from?

Until the early years of the 20th century, China didn’t have a single national language. Eventually, most Chinese residents thought that the country needed a common language to bring the country together, facilitate national communication and to combat widespread illiteracy.

Mandarin Chinese, also known as Huayu (language of Chinese), Guoyu (national language) or Putonghua (common language) is the official language of mainland China and has been since 1982 and of Taiwan since 1932.

Mandarin is shaped and based on the Beijing dialect and other northern Chinese dialects.

Mandarin is often split up into four subgroups.

Northern Mandarin - centering on Beijing and spoken in northern China and the Northeast provinces.

Northwestern Mandarin - Spoken northward from the city of Baoji and through most of northwestern China.

Southwestern Mandarin - Centering on the area around Chongqing and spoken in Sichuan and adjoining parts of the southwestern part of China.

Southern Mandarin - Also known as lower Yangtze, Mandarin, is spoken in the area centering around Nanjing.

There are two types of writing systems in Mandarin, the traditional characters and the simplified characters.

At Keats School in Kunming, China, teachers teach students how to write simplified Chinese characters because they’re most commonly used. Not only are they easy to learn and understand, but the simple characters are easier to memorize too.

We’ve mentioned it before, the Mandarin language has 4 different tones. That can seem quite confusing when your first language is not a tonal language, but we’re here to help you.

To break it down, the same syllable can be pronounced with 4 different tones. This means one word in Chinese has four different meanings.

The second tone rises moderately. In English, this is when we raise our voice when asking a question. The third tone falls and then rises. The fourth tone starts high and drops sharply.

Fastest growing language in the world

Hold onto your hats, Mandarin is quickly becoming the fastest growing language in the world. You want to learn it, your neighbour has probably thought about learning it and business professional recommend learning the language.

People from all over are trying to learn it and we know this because every year students from across the globe come to Keats School to practice.

Mandarin Chinese is the language for business, education and tourism.

It got a huge boost when Facebook CEO & Founder Mark Zuckerberg took a group of students at Beijing University by surprise when he did a speech in Mandarin for them. Other famous faces making the Mandarin language popular include former Australian Prime Minister Kevin Rudd, former US Treasury Secretary Timothy Geithner and Prince William.

Prince William gave an interview in Mandarin after wishing everyone a Happy Chinese New Year.

Now that you know a brief history of the Mandarin language, it’s time to to get your books out. Keats School in Kunming, China has eight different study abroad programs with flexible start times. To learn more about Keats School and the Mandarin programs, contact us today. 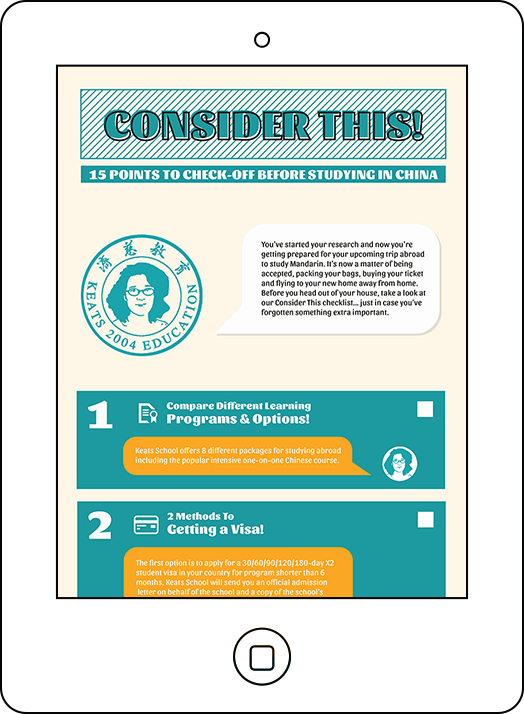