4 Benefits of Studying Abroad as a Millennial

There is an allure to traveling abroad to study. It’s a certain “je ne sais quoi” that sets in when someone begins to consider moving away from their hometown to study another language in a brand new country.

It’s the feeling of butterflies fluttering in the stomach.

This desire to move away and see something new is something that’s becoming normal for millennials around the globe. An HSBC study surveyed more than 27,000 expats from 100 countries about why they’re choosing to ditch their home countries.

They found that millennials are willing to say goodbye to their hometown friends and decline offers from local colleges. Why? Because they want to experience a new perspective.

Here are four reasons why millennials are choosing to leave their comfort zones to study elsewhere.

Most millennials are balancing the need for an education with intense wanderlust, which is a desire and lust for wandering.

Daniel Obst, the AFS CEO, says that “Gen Z students don’t just want to simply travel to other countries; they are looking for authentic experiences through the eyes of local people. These are the adventures and stories they want to experience and share with others.”

It’s not about being a tourist, it’s about living. Young adults want to chase down new cultural experiences.

Politics is a new reason why millennials are wanting to study abroad.

Government state of affairs has become of interest to young voters, especially in the U.S.A. and U.K., this past year. With the political uncertainty in many countries, citizens are looking to leave their home. A good reason to say goodbye is to study in a new country.

Millennials are looking for countries to study in that are more liberal and accepting of gender, sexual orientation and ethnicity.

Kunming, China has a growing population of young students and one reason is because Kunming is home to more than 26 ethnic minority groups.

Millennials are opening their textbooks in new countries in hopes that it will benefit their future careers.

A study by SmartStudy found that 95% of students who were surveyed admitted that studying abroad served as a catalyst for increased maturity: something an employer looks for.

Another study found that three-quarters of the respondents said that they acquired skill sets that influenced their future career paths.

While the majority of students who study abroad will go back to their home country for a career, there is an appeal to staying abroad to work full-time.

The growth of “digital nomads” and the redefining of “work” are appealing to youth today. More than half of the expats (52%) aged 34 or younger are rating the work culture in their host countries better than back home.

Are you wondering what one of the most popular destinations is to study and work abroad in? It's China!

Millennials are traveling to China because they realize the impact of globalization on their career goals. Learning Mandarin, the most spoken language in the world is a huge benefit for their futures.

The most important reason millennials are traveling abroad to study is that they want to grow their language skills.

Young adults are choosing to learn Mandarin because China is poised to overtake the United States as the world's largest economy by 2030. Add to the fact that there are nearly a billion native Mandarin speakers and you've got the two top reasons to grow your language skills.

There are many different options to study a new language, but Keats School in Kunming, China has found that intensive one-on-one immersion style courses allow the student to get the most out of their studies.

While the language itself is important, so is the country and city of choice. Students are looking for a place that has a good reputation, is safe, is close to other places for traveling and is welcoming to all people.

The world is their oyster

Millennials have grown up with the world at their fingertips and have always been able to connect. They are casually fearless and believe that travel is a level of adulthood to reach and a rite of passage.

So there you have it, 4 reasons why millennials are choosing to say hello to studying in a new country. After reading this, do you now have the travel bug? Won't it be fun when your parents and friends have to Google Translate your letters home? We think so.

To learn about what Mandarin courses are available at Keats School in Kunming, China, visit our website or contact us today.

Are you looking for information on getting a visa to study abroad?

It can be overwhelming and confusing researching the visa application process, trust us. Take out the guesswork and download our Free Visa Fact Sheet. We break down everything you need to know when it comes to travel visas. 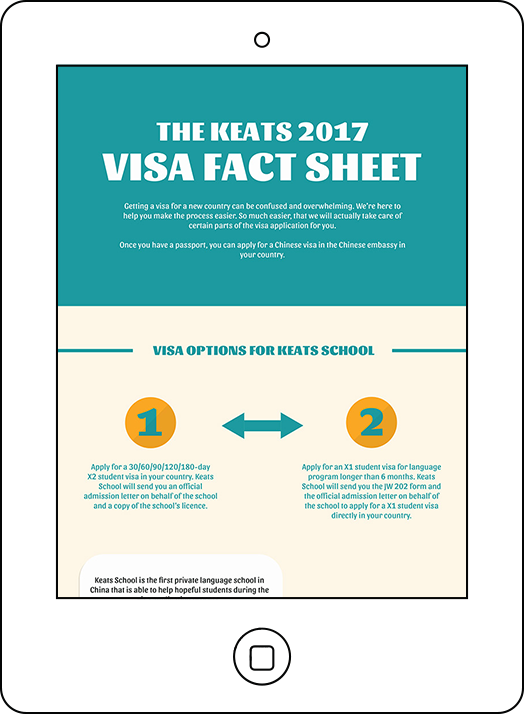